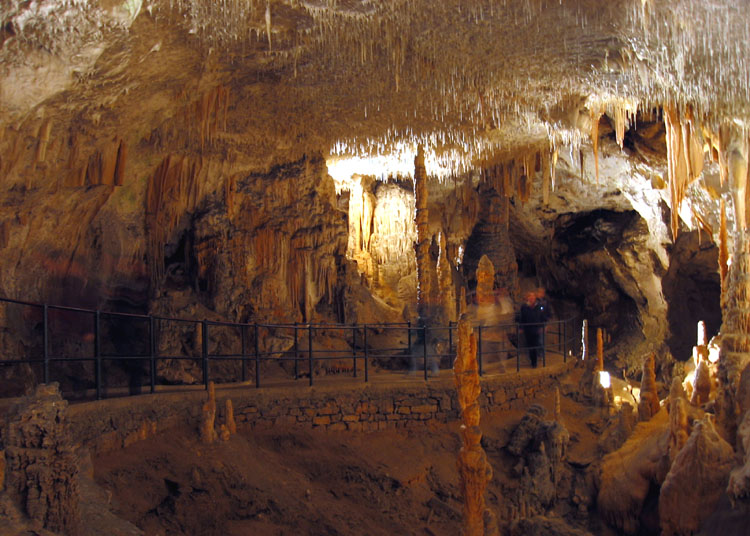 In the heart of the green pearl of Europe, The Republic of Slovenia, there exists an underground, fascinating subterranean paradise: the Postojna Cave.  The breath-taking Postojna Cave system is a series of the cavern, halls, and passages which are about 24km long. The cave was carved by the Pivka River some two million years ago.

Postojna Cave is the only place on the surface of Earth where you can see the most astonishing Brilliant in the cave formation form; can meet the baby dragon; see the towering mountains, murmuring rivers, and vast subterranean halls. It is a real and matchless adventure for the explorers and is the cradle of Speleobiology.

The cave was opened for the visitors 200 years back in 1818, and since then, over 40 million visitors came there from all over the world. There is a Golden Book of Visitors which has the views and experiences of the most distinguished ones.

Things You Should Not Miss in Postojna Cave

This is half and an hour tour that includes a train ride and a walk along a smooth footpath. The unforgettable ride through the most captivating cave, with magnificent cave formations and diverse fauna, starts from the Great Mountain caverns. A guide accompanies you through tunnels, halls, and galleries. The galleries are decorated with a jaw-dropping array of stalactites and enormous icicles. There are also stalagmites that are called the skyscrapers of Postojna cave. From the Velika Gora Cavern, you come across the Russian Bridge, that was built by Russian prisoners of WWI, in 1916.

Then come 500m-long Caves again. There are huge stalagmites and stalagmites that took two million years to develop. As it requires 30 years to produce 1mm of stalactites. From the halls of beautiful caves, the train continues southward through the winter hall. Here you see the 5m, snow-white stalagmites called Brilliant, and the mighty Baroque Pillar which has emerged and established as the symbol of the Postojna Cave.

Then you reach the largest portion of the Postojna Cave: The Concrete Hall. It is famous for musical performances at Christmas, as it can accommodate around 10,000 people. Visitors retake train from Concrete Hall and reach the entrance.

It was believed that a dragon used to live in Postojna Cave, and the human fish are its offspring. It is the superhero of animals? world that lives in the caves? eternal darkness. The Olm or the human fish is the only European underground vertebrate and the largest predator that has a life of around 100 years and can survive more than 8 years without having any food.it is completely blinds and adapted to the dark cave life.

Postojna cave is the biologically most diverse cave in the world. There inhibit more than 150 animal species. One of its corridors has a vivarium, which must be visited to know about the animals. The most historical story happened in 2016 when people saw the dragon hatchlings coming out of human fish eggs for the first time.

The Breath-Taking Brilliant and The Skyscraper:

The Postojna Cave is home to all type of incredible Karts formations. Stalagmites and Stalactites are enormous in number and versatile in size, shape, and nature. The magnificent five-meter tall bright, white stalagmites, called Brilliant is the symbol of Slovenian Karts and the Postojna Cave. The drops falling from Brilliant has formed and ornament-rich column set beside it. This is impossible to ignore this stunning view. Skyscraper is another mighty stalagmite formation, that is 16 meters tall.

The Postojna Cave Park includes more caves, exhibitions, an old mill, two castles, a river, several restaurants, and a hotel, in addition to the Postojna Cave.

Among 150 residents of the cave, the most prominent is the Olm. It is endemic to the European underground waters. Vivarium has information about all the biological life of the cave.

From the magical depth of the cave, there is a corridor to the fairy-tale world of knight: The Predjama Castle. The castle is among the ten most fascinating castles of the world. It is perched in the middle of the rocky cliff for 800 years.

It is a permanent exhibition which is held in a separate building in Postojna Cave Park. The Expo started in 2014 and it is the largest Expo about the caves and the Karts formation on the globe. It is interactive and guided. The people with the urge to have a deep insight about the phenomena and underground world are more interested in the Expo.

In the times of the former regime, the famous Hotel Jama had a double life. With humans, there lived an undisclosed creature, that caused unusual activities. The activities cause a stir even today. Visit the secret rooms of Hotel Jama and discover the mystery.

The Modrijan Homestead lies on the Pivka River in Postojna Cave Park. It features a mill, a residential building, and a restaurant. The mill is functional for 500 years now.

These three caves are connected to the mighty Postojna Cave alongside the river Pivka. Every cave is unique and has a magical world inside. The tour takes around 2 hours. It is a must-see for the cave fans visiting Postojna Cave.

There is a regular tour and an adventure tour. Obviously, the adventure tour is more challenging. So, it is recommended for the people strong physical conditions and the ones who are experienced cave lovers. The regular tour is equally exciting. So if you are planning your vacations, keep the Postojna Cave Park at priority and make your vacations the most exciting and memorable forever.