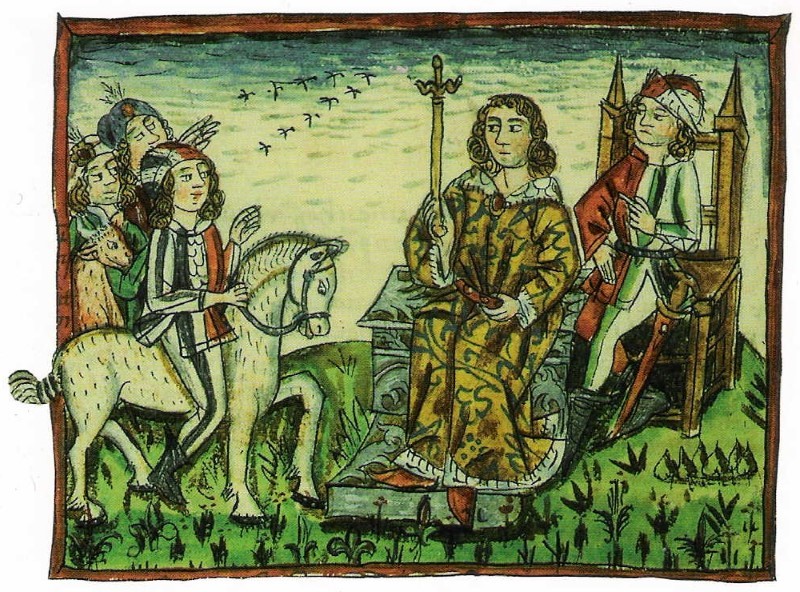 The early Middle Age?s Slovenian Duchy Carantania located in Eastern Alps that is the present-day Austria came to existence after the Roman Empire declined in 476 in the territory of Inner Noricum, a Roman province.

The Early Mentions of Carantania

Paulus Diaconus mentioned it for the very first time in 595 as a Slovenian province and by Fredegar in 631 as Venetian march. Annonymous Ravennas referred to territory?s population as Carantanos around 670 and from then on, Carantania?s denomination also existed in medieval sources.

As expected, Carantania is a name with a rather remote origin, with the word ?car? which means the rock, referring to it as a country that has rocky and barren mountains. The term ?kar? and the palatalized form ?cer? refers to a cliff that still exists in contemporary Slovenian.

This name is also preserved in the form of Gorotan or Korotan, the former compounded from ?gora,? a Slavonic word that means mountain that is added to the Indo-European term ?stan? that means home or country. This name also corresponds to Carni, the people who lived between the Adriatic Sea and the Eastern Alps even during the pre-Roman era.

The Rise of Carantania

Historians have been explaining Carantanians? Slovenian origin to this day through the supposed invasion of Slavs that came to Eastern Alps across the Balkans coming from the assumed original homeland at the back of the Carpathian Mountains. The invasion should have taken place after 568, the year when the Lombards left Pannonia to move to Italy that opened a way for Slavs to enter Eastern Alps.

However, there are no records in history that talks about this alleged invasion. Aside from that, the contemporary Slovenians who descended from the Carantaniansa are actually a part of the group of Western Slavs, not Southern Slavs. This is easy to conclude based on their actual geographical position alone.

It seems that similar to the Western Slavs, the Carantanians could trace back their ancestors to the indigenous people known as Vendi, Veneti, or Wends that were able to survive in the region of Middle Europe as a class of peasants during the era of the Romans and Celtics. These groups were still referred to as ?Sclavi coinomento Vinedi? in the medieval sources with their country called ?Termini Venetiorum qui et Sclavi dicuntur.?

The key differences between the Eastern and Southern Slavs on one side and the Carantanians on the other side can also be seen in their social and cultural life. During the time when they were mentioned for the first time in 595 in historical sources, unlike the other Slavs, the Carantanians already had their very own state and duke.

The Growth and Expansion of Carantania

Boruth, the duke of Carantanian in 745 received support from the already Christianized Bavarians against the Avars. This made Boruth decide to accept the Christian faith as well. He then recognized the superiority of the Frankish king who, due to his close association with the Pope, was considered as the protector of the Christian World or Imperium Christianum and the Church.

The Irish monks led the conversion to Christianity as spearheaded by a Saint, Bishop S. Modestus. Another Irish monk, S. Virgil (Fiorgil), Bishop of Salzburg, sent Bishop S. Modestus to Carantania.  It was in 753 when S. Modestus ordered the construction of Cathedral Sancta Maria in Solio or Saint Mary on the Throne, known to this day in the name Maria Saal in German and Gospa Sveta in Slovenian. This is located in the north of Celovec or Klagenfurt in Carinthia?s Austrian region and the sepulcher of S. Modestus is found there as well.

This is how the Christianized Carantania became a part of the community of Europe right under the protection of the Frankish kingdom. It didn?t take long before the Frankish kingdom became the Holy Roman Empire or Sacrum Imperium Romanum when the pope led the coronation of Charlemagne as the Emperor in 800.

Romanum was the denomination that had a trace of the previous Roman Empire that represented the Universe and was Christianized under the rule of Constantine the Great. The medieval empire was able to survive for a millennium until it came to an end in 1806 because of Napoleon.

Having Carantania incorporated into the Holy Roman Empire didn?t mean that its independence and statehood was already lost. However, the only difference is that there was already a limit to its sovereignty. From then on, the Emperor or King was the one who assigned the Duke of Carantania. However, the Duke will only be able to exercise his powers if the Carantanian veca or assembly accepted and confirmed him.

The Conversio Bagoariorum et Carantanorum that written ca. 870 carefully pointed with legal precision to the permanent existence of Carantanians? right to choose their letter. This is why after Duke Boruth died, the Carantanians asked for Gozard or Carast, the duke?s son held in Bavaria. However, it was in 751 when he was released and allowed back to Carantania after the Frankish king?s order who then proclaimed him as the Duke. Once again, in 752, after, the death of Cast, in the same manner, the Frankish kingdom received Cheitmar or Hotimir, his cousin who was then given the title of Duke.

With this process, it is easy to see that the Carantanians or the Slovenians were able to preserve their right to accept or reject the proposed duke as they pleased to do so. This is why when 11th century came, they were able to put a stop to the appointment of the three dukes that had the nomination from the Emperor himself.

This is because these nominated dukes didn?t have any relation to the nobility of the Carantanian or no relation even from the side of the mother. It therefore means that the three were not indigenous as based on the Carantanian law or ?institutio Sclavenica.” It was in 1058 when the Carantanian army prevented Kuno, one of these three dukes, together with his escort, from trying to cross from Lombardy to the frontier.